(In a video interview segment for CBS, called What’s Trending,” Fiasco [aka Wasalu Muhammad Jaco] said that casting a ballot for a politician is like an endorsement of everything that person does. Lupe won’t do that for any presidential candidates because, “I don’t want you to bomb some village in the middle of nowhere.”)

It's that time again.
Elections are right around the corner. So I am gonna give my two cents. Fuck Politricks. That is it. plain and simple. Fuck the elections, fuck representative politics, fuck it all.

Those are my two cents...


At first I was not gonna comment on this spectacle but then I discover that many hip hop artist are participating in this spectacle of Empire. I have a hard time stomaching this. Comrades in movement supporting the system that creates gentrification and economic displacement, turned Hip Hop into tool of imperialism, and corrupted the cultural reproduction of Hip Hop to the level of commodity.

I feel a sense of liberalism/progressiveness has penetrated Hip Hop to levels that are unhealthy. Artist pushing people to vote and encouraging the way of reform, building and reinforcing the Non-Profit Industrial complex, and being pawns in the suppression of resistance.

I may come off as a little harsh. It's supposed to. Voting is a sham. Voting is Not an effective way to enact change. When people vote, they are giving legitimacy to a system. They may vocally speak against the system all they want but by voting you are giving the system credibility. What I mean by this is that when you check that box or pull that lever or press the button on the computer screen, you are acknowledging that you believe in the system. There is a lot of rhetoric saying things like "voting is our voice" or even  "Dr. Martin Luther King Jr., and many others, died for a most precious human right, the right to vote." All kinda of people are spewing these lines and probably really believe in them.

I don't believe in the system. I have no hopes of the system reforming it self. I recognize the history of this system and in no way want to support or legitimize it's existence and/or it's legacy.

I want to point out that we don't vote for President, but rather the folks who vote for them are in the Electoral College. This little tidbit of info was not taught to me in my mandatory U.S. Govt. class in high school. And when the teacher was confronted about this he said it wasn't in the curriculum, and it didn't matter. This is important to note, cuz the Electoral  College rarely (if ever) comes up in these discussions around getting people to Vote. "Remember Florida? or Ohio? or Cali?" great examples people throw in my face to argue why voting matters- "One Vote could have changed the outcome."
My response is usually something like "What about the Electoral College? would one vote have changed that? Remember presidents are not elected popularly."

People (politicians) have been arguing for over a century that the Electoral College is inherently undemocratic (albeit these discussion have been behind closed doors of Congress and the Senate). Which takes me to the history of voting. First is was white male landowners who could vote, then white males, then women and non whites got their vote. Ok, so this system started as and is inherently patriarchal, capitalist and racist. I don't support that, period, and I never will. In modern times, the glass ceiling has yet to be broken, political campaigns bring in more money then any social justice or anti-capitalist campaign, and vote rigging and manipulation still occurs in people of color communities.


To say all those comrades from a time past were fighting to Vote is but a small, i mean tiny, thing they were fighting for. In my studies I have come realize that the Empire makes of point of picking the lowest common demand and granting that and calling everyone else asking for more an extremist and violently suppressing all the people deemed extremist. This happen in the civil rights movement (Malcom X (phub), B.L.A., Black Panthers, Rainbow coalition  etc.). To call the civil rights movements a success is dishonoring all the struggles those folks went thru. We got a seat at the table and we got many more bunks in the prisons. We got a politician or two we also got mass poverty, displacement and gentrification (locally, nationally, and internationally). I am not trying to speak down about the movements that came before us but rather I want to point out that those struggles were never completed and have been corrupted by time. 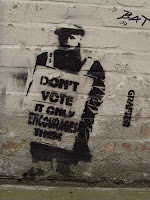 "Your vote is not for the candidate you select, it is a vote to agree to consent to be governed by whoever wins, a demonstration of faith in the system so great that you believe that whoever wins will be suitable to govern the country. That’s probably not what you really believe."


"The problem with voting for a Third Party is that it legitimizes the two-party system by falsely pretending that there are viable choices beyond the Dems and the Reps. That is just not true. The Ds and Rs have set up the system in such a way that no third party, no matter how viable or popular, could ever gain access to enough ballots, to seats at debates, or funding for advertising, to ever make a mark. When you play along with a game you know is rigged, you legitimize it.”
(unidentified person)

This is the system we resist.

So yeah we can vote. We can support the system that enslaves and/or displaces us. We can give legitimacy to the system that kills people all over the world and pillages all the natural resources provided to us from Mother Earth.......Yeah we can Vote! but Voting is not fighting. At the best it's a waste of time. 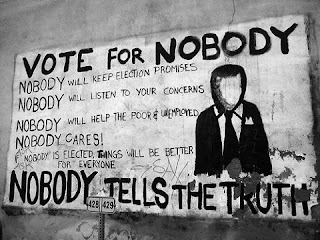 Welcome: The Revolution will Decolonize! 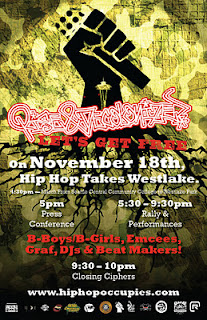 *This is a slightly altered/edited version of a very short speech I gave at "Rise & Decolonize! Lets Get Free" event held at Westlake Park on November 18th, 2011.*

In solidarity I will begin with a chant/poem that was recited on the streets from Tunisia to Tahir square:


Imperious despot, insolent strife
Lover of ruin, enemy of life!
You mock the anguish of an impotent land
Whose people's blood stains your tyrant hand
And desecrate the Magic of the Earth
Sowing your thorns, to bring despair to birth

With that said, I am going to simply and briefly explain the process of Decolonization as I envision it:

Decolonization is the process of transformation of the current capitalist, hetero-patriarchal, white supremacist, social, cultural, and economic construct, that has been imposed upon us from the corporate-political empire, whose heart is currently Wall St.

To truly embrace the process of Decolonization we cannot allow for co-optation by any institutions created within/by the current imperial construct, these include but are not limited to the Bi-partisan Political system and all parties involved, it also includes the non-profit industrial complex, the Corporate oligarchy, union bureaucrats and even educational institutions. These are all products of the previously mentioned imperial construct created to maintain and perpetuate the status quo. THIS CANNOT CONTINUE!!!

No longer will we stand for the powers that be to dictate how we live. This is the 1st baby step in the long march of our Freedom.

Welcome to the REVOLUTION!

Everything for Everyone
The Revolution Has just begun!